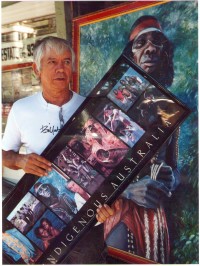 Award winning painter Gordon Syron is a self-taught artist who has carved himself a remarkable career which has influenced his peers in the artistic, political and cultural arenas. Syron is known for his political and historical oil paintings many of which were exhibited in two retrospectives, in 1998 and 2004 at the Australian Museum, Sydney. Syron has made many significant contributions to his community, as co-founder of the Eora College with Bobby Merritt, he was also the first art teacher there. From 1997 to 2007 his gallery, Black Fella’s Dreaming, has supported and encouraged new, young and struggling artists.

Gordon Syron was born in 1941 at Nabiac, New South Wales and belongs to the Birpi/Worimi language group. ‘When I was young I could lean off my horse and in seconds have an armful of breathtakingly beautiful wildflowers, I wouldn’t even have to get off my horse to pick them. This Land was sacred to me that is why I chose to paint about it.’

After gaining his Intermediate Certificate in 1959, Syron studied Technical Drawing at Ultimo Technical College, Sydney. He then went on to become an apprentice electrician at the Railway Institute. Other early jobs included working as a lifesaver at Soldiers Beach Budgewoi, a truck driver and a PMG linesman. He also pursued his passion for amateur boxing which resulted in him winning several NSW Golden Gloves awards.

In the 1970s Syron was convicted for murdering his uncle’s adopted son over the inheritance of the family farm. While serving a life sentence at Bathurst Gaol Syron taught himself to paint with some pointers from a prisoner in jail for forgery. It was during this time that Syron painted his famous painting ‘Judgment By His Peers’ (1978), in which a white defendant faces an all-black jury and courtroom inspired by the judge during his court case refusing Syron’s defense counsel’s request for an Aboriginal jurist on the grounds that his client was not black enough to be considered Aboriginal.

‘I painted backdrops for Bobby Merritt’s play called The Cakeman which was one of the first plays written by an Aboriginal man. I was in prison with Bobby. He got out first.’

Syron was released after serving 10 years and between 1982 and 1986, he helped set up Eora Centre, an Indigenous visual and performing arts school in Redfern where he worked as the Visual Arts head teacher. After leaving Eora, Syron worked for two years (1987-1988) as a lecturer in Fine Arts for the Aboriginal Education Unit at the University of Sydney.

Much of Syron’s work reflects his anger and frustration at the oppression and the dispossession he experience as a result of his imprisonment. Many of his landscapes were inspired by his childhood but he explains ‘the mining companies came through this area and took more than a foot-deep of top soil off thousands of acres of our land. They took all the elements and goodness out of the soil. Now the wildflowers don’t grow anymore.’

Some of his most intriguing paintings are part of his series called Aboriginal Fairies. Gordon describes about how the series came about, ‘when I was growing I only ever saw white fairies everywhere in books, so I created Aboriginal fairies for Aboriginal kids, they are everywhere and you just need to look for them.’

He was the president of the Deaths in Custody Watch Committee in the late 90s. From 1997 to 2007 his gallery, Black Fella’s Dreaming supported and encouraged new, young and struggling artists. The extent of Syron’s work was seen in two retrospectives, the first in 1998 and again in 2004 at the Australian Museum, Sydney. In 2000 he was the artist-in-residence for the Australian Humanist Society, Sydney. In 2004 two of Gordon’s paintings were chosen to be displayed at the Athens’s Olympics and then toured to Beijing to be displayed at the 2008 Olympics. Also in 2004 Syron married photographer and long term partner and agent Elaine Pelot before the cameras of the SBS funded documentary ‘Our Bush Wedding.’

Syron has been described as ‘the father of urban contemporary urban Aboriginal art‘. 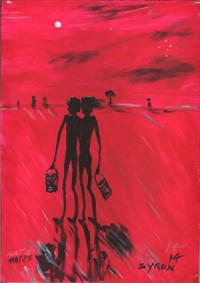 A fuller biography of Syron an be found on Design and Art Australian Online.

All the artworks featured in www.gordonsyron.com/art are copyright of the Artist Gordon Syron. Please ask permission before use.