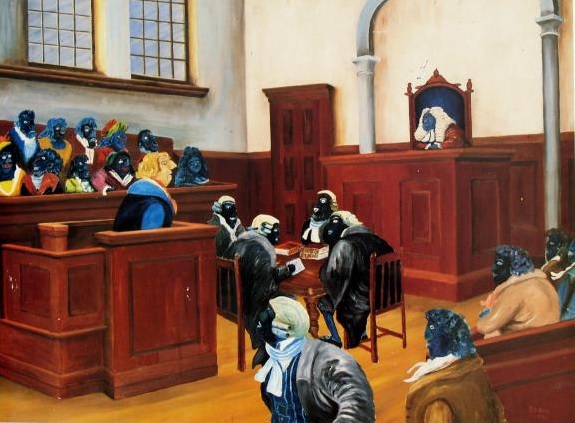 One of Gordon’s most famous works has been valued by Adrian Newstead Art Consultant. Newstead describes it as a ‘very unique work of art’ and ‘already of iconic significance’. In the valuation Newstead quoted the then Minister For Aboriginal and Torres Strait Islander Affairs; The Hon Robert Tickner MP who wrote in 1995 about it’s significance:

“The painting was painted in Long Bay Gaol and first hung in the artist’s cell where he was serving a life sentence for a death that was the result of tribal retribution.

It was shown publicly for the first time at an exhibition on Eveleigh St. Redfern at Murawina (means Black Woman), a childcare centre in 1978-79. The exhibition was arranged by three of the seminal women working with children on the ‘block’, Mrs Bostock, Mrs Merritt, and Mrs Ingram. The block was a hotbed of discontent at this time yet according to the artist:

Not one car was touched. All who came were safe. Many law people attended. I came out of prison for the evening to attend my own art exhibition and a prison officer accompanied me. He said just call me Jack for the evening instead of Sir!

The painting was initially exhibited under the title , “The Real Australian Story”.

The artist was quoted about its subject as saying:

I believe I would not have been sentenced at all, had I been judged by an Aboriginal jury. In British law a man is judged by his peers.

In explaining the background to this work Gordon Syron has said:

This painting is my most meaningful work. It is the story of my life. This trial happened to me. I challenged the jury system of Australia. I asked that I be judged by my peers and your peers are your equals. I asked to have some Aboriginal people on my jury. One lawyer said  that I wasn’t black enough to be black and the other lawyer said  that I wasn’t white enough to be white. They then argued this point in front of me for sometime. Both my parents were Aboriginal. It was such an insult to me and my family. I was judged by an all-white jury. (If you are a pink fella then according to British law and now Australian law you are entitled to have a pink person on the jury). I served a life sentence.

The painting instantly struck a chord with Aboriginal audiences given their high rates of incarceration at the time. Two decades later Aboriginal people still made up 15.2% of the prison population in NSW, though they were only 2% of the general population.”

Newstead writes: ”At the time it was painted this work was seen as a complete break with tradition. Southern Aboriginal artists working in a ‘Western’ tradition attempted to cross the cultural bridge by painting their land in realistic grand vistas, or through nature studies of birds, fish, animal or insect from their inherited religious stories.  Syron’s strong contemporary Aboriginal themes pioneered a field of representation that eventually influenced artists such as Richard Bell, Adam Hill, and Gordon Hookey. Though not always transparent Syron’s purpose has always been essentially political.”

A copy of the valuation can be accessed here: Syron Judgement Painting-PH Valuation (1)