Gordon Syron spoke at the launch of book The Sydney Wars

Gordon Syron was invited to speak at a launch event for a new book The Sydney Wars by Dr Stephen Gapps. Stephen asked Gordon to say a few words and described Gordon’s achievements and impact as a ‘re-visualisation of the ways we have been told and the ways we have seen that first fleet’. Stephen said Gordon’s works helped him to rethink the written histories of settlement as ‘invasion’. He also said Gordon’s work has helped him to understand ‘the military nature of the encounters.’

The Sydney Wars tells the history of military engagements between Europeans and Aboriginal Australians – described as ‘this constant sort of war’ by one early colonist – around the greater Sydney region.

Telling the story of the first years of colonial Sydney in a new and original way, this book is the first detailed account of the warfare that occurred across the Sydney region from the arrival of a British expedition in 1788 to the last recorded conflict in the area in 1817. The Sydney Wars sheds new light on how British and Aboriginal forces developed military tactics and how the violence played out.

Analysing the paramilitary roles of settlers and convicts and the militia defensive systems that were deployed, it shows that white settlers lived in fear, while Indigenous people fought back as their land and resources were taken away. Stephen Gapps details the violent conflict that formed part of a long period of colonial strategic efforts to secure the Sydney basin and, in time, the rest of the continent.

At the event Gordon showed two of his paintings ‘1788 Terror Nullius’ and one from his series on Black Fairies. Gordon talked about how many of his works portray the invasion ‘in 1788 when the Red Coats came through the heads… they stole my land’ and how invasion is a repetitive theme in his works – even the painting of fairies includes the ships coming through the Heads. Gordon spoke movingly about his own land being stolen in an echo of 1788.

Also at the launch were Phillipa McGuinness (NewSouth Publishing) who introduced the book and Professor Heather Goodall (University of Technology Sydney) who spoke about it’s importance.

Some works by Gordon on theme of invasion 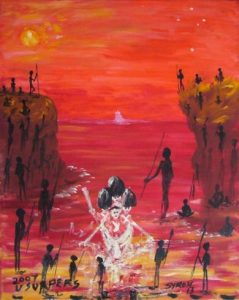 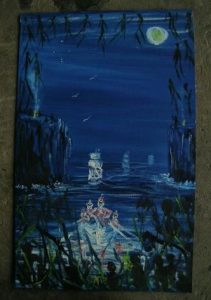 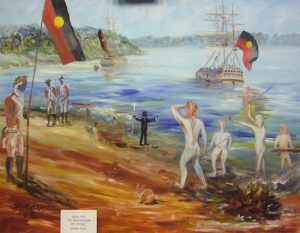 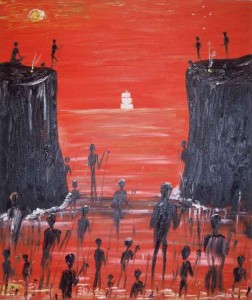 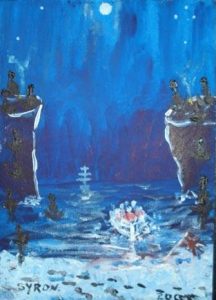