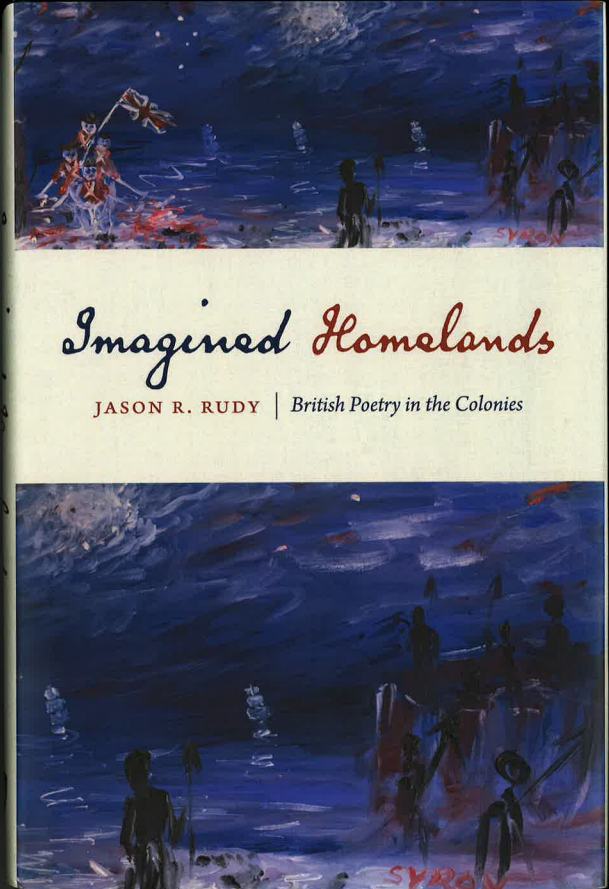 A new book by Jason R. Rudy has been published in hardcover featuring a painting by Gordon Syron on the cover. The book, Imagined Homelands uses on the front cover ‘Invasion Day (2012)’ which Syron refers to as ‘Coming Through the Heads’. Page x11 in the acknowledgments has a quote from Syron explaining the meaning of ‘Invasion Day (2012)’:

‘I want to show the negative feelings of the Aboriginal people. The truth is, the way it was, the white master race came and took our land and did not even have the courtesy to ask us or buy it….’

The book – subtitled British Poetry in the Colonies – focuses on poetry. It was published by John Hopkins University Press

Imagined Homelands chronicles the emerging cultures of nineteenth-century British settler colonialism, focusing on poetry as a genre especially equipped to reflect colonial experience. Jason Rudy argues that the poetry of Victorian-era Australia, New Zealand, South Africa, and Canada—often disparaged as derivative and uncouth—should instead be seen as vitally engaged in the social and political work of settlement. The book illuminates cultural pressures that accompanied the unprecedented growth of British emigration across the nineteenth century. It also explores the role of poetry as a mediator between familiar British ideals and new colonial paradigms within emerging literary markets from Sydney and Melbourne to Cape Town and Halifax.

Rudy focuses on the work of poets both canonical—including Tennyson, Browning, Longfellow, and Hemans—and relatively obscure, from Adam Lindsay Gordon, Susanna Moodie, and Thomas Pringle to Henry Kendall and Alexander McLachlan. He examines in particular the nostalgic relations between home and abroad, core and periphery, whereby British emigrants used both original compositions and canonical British works to imagine connections between their colonial experiences and the lives they left behind in Europe.

Drawing on archival work from four continents, Imagined Homelands insists on a wider geographic frame for nineteenth-century British literature. From lyrics printed in newspapers aboard emigrant ships heading to Australia and South Africa, to ballads circulating in New Zealand and Canadian colonial journals, poetry was a vibrant component of emigrant life. In tracing the histories of these poems and the poets who wrote them, this book provides an alternate account of nineteenth-century British poetry and, more broadly, of settler colonial culture.

Jason R. Rudy is an associate professor of English at the University of Maryland, College Park. He is the author of Electric Meters: Victorian Physiological Poetics.

— Meredith Martin, author of The Rise and Fall of Meter: Poetry and English National Culture, 1860–1930

“An important, meticulously researched, and deeply learned contribution to the study of empire, poetry, and British colonialism in the nineteenth century, Imagined Homelands charts its own new and very original territory.”

“Drawing on neglected archives of remarkable range—both geographical and formal—Imagined Homelands explores the power of poetry in shaping individual and collective identity among settlers struggling to forge a sense of home in unfamiliar lands. This is a fascinating account of both poetry and British colonialism.”

— James Eli Adams, author of A History of Victorian Literature

“In this groundbreaking study, Jason Rudy throws new light on the place of poetry in Britain’s colonies. Compellingly, Rudy shows literature helped shape colonial attitudes and practices. It is a brilliant piece of scholarship that makes us rethink our views about cultural reproduction, and the social and political work that genre performs.”