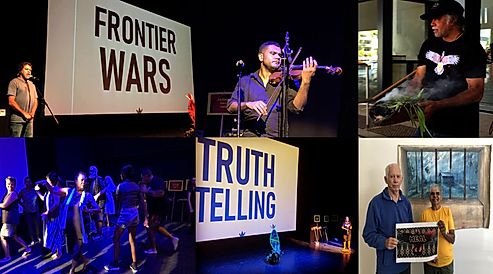 “In mainstream history the first known European to sail past North Queensland was Captain James Cook in 1770, which was also observed at Browns Bay in the Yarrabah district and this was documented with two paintings of his ship Endeavour, then painted onto the gallery rock wall by local Aboriginal people. In the late 1800’s the illegal occupation of the pastoral frontier and Native Police caused bitter racial violence and murders in Far North Queensland. Elder advocate Gudju Gudju recollected at the h e a l event “Our history, even though in this year Australia, in regards to the British colonised Australia, will celebrate 250 years this year, we here on Yidinji Country, our history of white Australia is only 141 years. So that is not too long. So when we talk about the Frontier Wars, and what happened here, when we look at it in reflection to inter-generational trauma, our people were removed off country, and before the removal, we fought, and our old people fought for this country. If you look around, you will see a number of those locations.” Synchronistically h e a l was held one month before the Endeavour replicas were scheduled to depart from Sydney and head up the East Coast of Australia….”

“Painter Gordon Syron, who is warming up to his 80th year showed his signature artworks that document invasion in an exhibition titled ‘Red Coats dominate my Paintings. He recounted on the day “I’m always painting about the Red Coats because the Red Coats came and they took the land. I’ll always remember that because I grew up on the land, and somebody came along and took our land, and that’s why in 1972 I went to prison… I learned a lot of things from that, and I use that to put in my paintings, because there is a lot of injustices, and things are not right. In this great country we’ve got, some people have got a lot of rights and some haven’t, and we’re supposed o be all equal. I know three of my uncles went to war overseas, and they didn’t have any land or anything like that.” Gordon and wife, American Photographer Elaine Pelot Syron attended h e a l and in a Q&A also spoke of their intentions to show their unique Art Collection and also set up an Artists and Writers Retreat on Magnetic Island. Elaine Syron said “If every Aboriginal person had some assistance to research their life that way it would be a way to heal as well, the healing process that needs to take place here in Australia because the Australian history has just been distorted so much that they just sort of left out Aboriginal people, left out the Frontier Wars and the Massacres. As a white person I used to teach History in High Schools when I first came and I knew for sure that Aboriginal people fought back, I couldn’t imagine that loved being servants and losing their lands, and I didn’t know anything when I cam here in 1971 from America. So I really took it on myself to take pictures of the dance and the protests.”